“We hope to return to Vietnam and explore it properly under better circumstances. Many thanks, from Ethan and Uyoa.”, two Irish tourists displayed their sincere thanks to Vietnamese medical workers for the assistance provided to the pair during their compulsory 14-day quarantine period in Nghe An. 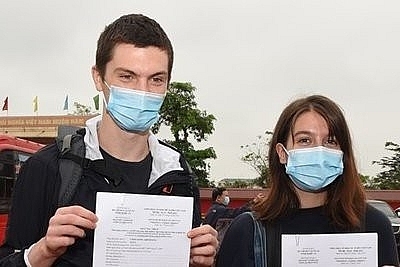 In their handwritten letter, Ethan and Uyoa state, “We have been travelling through Southeast Asia for the past few months. Our trip has ended here in quarantine in Vinh City.”

“Not exactly what we had planned for or expected, but we have had a pleasant time here. We have been treated kindly by all of the staff here and we are very impressed with how the Vietnamese are handling the COVID-19 situation,” they added.

The letter concludes with, “We hope to return to Vietnam and explore it properly under better circumstances. Many thanks, from Ethan and Uyoa.”

Both Ethan and Uyoa had originally entered the nation from Laos through the Cau Treo international border gate in Ha Tinh province on March 18 before being put into isolation in Nghi An commune of Vinh City.

Following the completion of their 14-day isolation, the Irish tourists sent a written letter to the management board of Nghi An commune.

As of April 1, 135 out of a total of 453 people have gone on to complete a 14-day compulsory quarantine period in the isolation area situated in Nghi An commune. 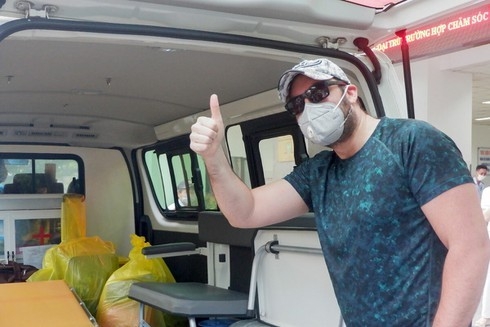 Houston thumps up after discharged from hospital

Young Matthew Houston, an American citizen infected with the coronavirus, has said Vietnam has carried out the isolation work well to prevent the spread of the virus to the community.

Houston, married to a Vietnamese woman in Da Nang city, had travelled to a number of epidemic-hit countries before returning to Da Nang on March 14.

As soon as he landed at Da Nang International Airport, he was placed in quarantine and later tests showed he had contracted the virus.

Being discharged from hospital on April 3, Houston said Vietnam has done a good job concerning the isolation work to ensure the virus could not spread to the wider community.

He also thanked Vietnamese doctors for saving his life and protecting his family from the coronavirus.

Houston is the fourth COVID-19 patient having received discharge from hospital in Da Nang.

Earlier, two British citizens and a Vietnamese saleswoman had also been released from hospital after making a full recovery. 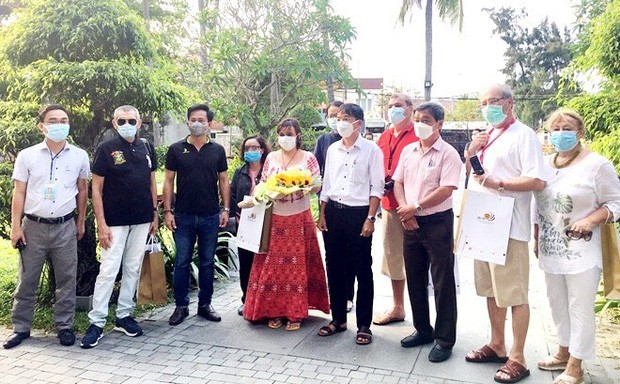 On March 30, a Polish couple handed a thank-you letter to medical staff at a Hoi An quarantine zone in Quang Nam Province. Having resorted to Google translate, the couple handwrote the letter themselves in Vietnamese, expressing their sincere thoughts and gratitude towards the Vietnamese government in general, and Hoi An Beach resort quarantine zone’s medical staff in particular.

In the letter, the Polish visitors stressed that Vietnam is a country of wonderful people and beautiful hearts, and said they are committed to return Vietnam one day to complete their journey.

“Once again, a million thanks for the care you’ve given us during this extremely difficult time fighting against the novel coronavirus. Vietnam will forever stay in our hearts,” they concluded.

Romanian tourist quarantined in Vietnam: ‘You can feel the smile, even behind the mask’

A Romanian tourist who spent time in quarantine in Hoi An City due to the novel coronavirus (COVID-19) epidemic has displayed her sincere thanks to Vietnamese workers for their assistance during her isolation period.

Cristina Daus is the tour leader of a group of 15 Romanian travelers that stayed at Hoi An Beach Resort for nine days as part of their quarantine.

Following their compulsory quarantine period coming to an end on March 28, the Quang Nam provincial People’s Committee assisted the group in their return home to the Eastern European country.

In her letter of gratitude sent to Hoi An city on behalf of the Romanian tourist group, Daus writes, “As I am writing this email to you, we are already flying above Vietnam to go back home. I just want to send you a letter of appreciation for your wonderful staff who have greatly taken care of us.”

“Your staff may be government employees or police force, but they handled everything with the softness of a five-star service! We felt really good taken care of,” she added.

“It’s my third time in Vietnam but the first time I interacted with the same people for a number of days and I can say all of you were great representatives of your country. Even the most upset tourist had to admit that and wondered where else we could have gotten same great treatment, in this situation,” she stated.

“As Hoi An is by far my favourite cultural place in Vietnam and because I especially love the time of the Full Moon festival, I just can hope that this virus-maddness will stop soon so I can be back with new groups to show the beauty of your country.”

She concluding by writing, “Again, on behalf of all my tourists, thank you so much for everything…!