Searching for a lost mouth of the Mekong River

The Mekong River, one of the world’s major river systems and the heart and soul of South East Asia, is fondly called by Vietnamese as Cuu Long (Nine Dragon) River... 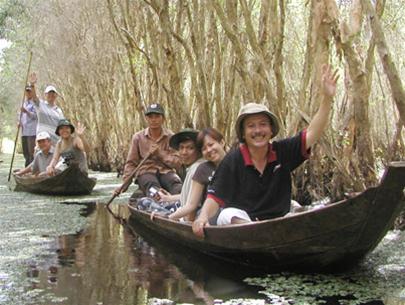 Searching for a lost mouth of the Mekong River

The Mekong River, one of the world’s major river systems and the heart and soul of South East Asia, is fondly called by Vietnamese as Cuu Long (Nine Dragon) River because when entering Vietnam, the river splits into the Tien (Upper) and Hau (Lower) and flows through the country before pouring into the sea through nine mouths.


Recently, however, it has been said that the Bassac (or Bach Sac) mouth of the Cuu Long River, might be gone. Over the weekend, HCMC newspapers and television stations and the tourist company Vietmark made a three day field trip to search for this lost mouth and find the southernmost point of Vietnam.

Expedition leader, Truong Hoang Phuong, Director of Marketing of Vietmark, told the Daily that for about 20 years onward there have been only eight river mouths, Tieu, Dai, Ba Lai, Ham Luong, Co Chien, Cung Hau, Dinh An and Tran De on maps of Vietnam published by Ban Do (Map) State Publisher and that he read articles mentioning the loss of the Bach Sac mouth and that this trip may prove what is still in doubt.

The group departed in the very early morning to have enough time to warm up this discovery tour with a visit to another river mouth, the Ba Lai mouth in Ben Tre Province. Here, a weir has been built connecting Binh Dai and Ba Tri, the two coastal districts of Ben Tre. The 544 meter weir is part of the project to clean up the water in the north of the province and was finished in 2002.

Then, the group headed to Tra Vinh Province, crossing the Ham Luong River on a Co Chien ferry and catching a boat to Cu Lao Dung (Dung Island) in the lower reaches of the Hau River where it splits into three branches before pouring into the sea through three mouths, Tran De, Bach Sac and Dinh An.

However, when reaching Bach Sac, we find that it has narrowed into a canal named Con Tron. Phuong said that Trinh Cong Ly of the Department of Culture, Sports and Tourism of Soc Trang Province, told him that what used to be a large branch is now a small canal about seven meters wide. Comparing an old map of Vietnam drawn by the French in 1952 and based on information collected in 1934, and a map made this month, the group also notices this difference.

We spent a night homestaying with a local of the island, enjoying the delicacy of ca loc nuong trui (unscaled fish grilled whole in straw) of the southern part of the island and invited some of the oldest locals to ask them what happened to the Bach Sac river mouth.

Duong Van Canh, aged 73, of Dai An 1 commune in Cu Lao Dung District told the group that he has lived here since 1955 and noticed a new islet had risen in the rivulet mouth Dai Ngai, the point where the Hau river divides into three branches, while the land at Bach Sac mouth was also raised from the silt of the branch of Dinh An mouth, extending seven kilometers into the sea and creating a shelter for clams, helping local fishermen have an income of over 1 billion per year.

By Thuy Nguyen in Soc Trang